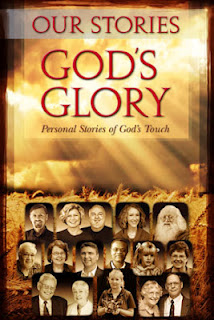 Everyone has a story—a story with the power to impact us in a special way. When an individual in this book shares what happened in his or her life, one central character emerges: GOD—the God of the Universe!
Actually, all these stories are God’s stories. God is the Giver, the Revealer, the Redeemer, the Encourager, the Forgiver, the Helper, the Rescuer, the Provider, the Savior and the Friend.

How this book got started:
In my early teen years, my mother taught me embroidery. While we sewed together, Mother would recount the inspirational stories of her life. She told me how my grandmother was instantly healed of a terrible skin disease when a traveling "circuit-rider" Assembly of God preacher prayed for her.
Mother also told how all her  relatives in South Dakota would gather together Sunday evenings to sing hymns and to pray as they struggled through hot summers, failed crops, sickness, and harsh winters.
Many times, I asked Mother to retell the story of the angel who appeared to my Uncle Johnny shortly before he died of cancer.
I would ask to hear the stories over and over, especially how the Lord held my mother’s hand at the lowest point in her life (this story is in the book).
Forty years later, in the hospital and at the point of death, my mother came out of a coma and told the nurse and my brother that she had a vision of a large door in front of her. She thought she was at heaven's gate, so she prepared herself to meet the Lord, asking once again for His mercy and forgiveness and declaring her trust in Jesus as her Savior.
Then she waited . . . but the door did not open.
After a pause, Mother said out loud, "Well, the door isn't opening and I'm know I'm not going to die right now. The Lord just told me, 'Not yet, Ella. I have work for you to do.'" After that mother slipped into another coma.
My mother lived five more years and only God knows how much "work" she accomplished through her prayers and intercession three times a day for all her family, and for many other people. On the day of her funeral, many people asked each other, "Now who will pray for us?"

A few years before she died, my mother did take time to write out many stories of her life and also about my father's last six weeks of life. I have always wanted to share her stories of faith with others. Some of those stories are in this book.
My prayer is that these stories and testimonies from my mother as well as from many other people will inspire others to trust God and to write down and share their own stories of God's faithfulness. It's one way we truly give God the glory!