It was a long journey from the home of our missionary parents to our boarding school in Columbia. First, my sister and I got on a cargo plane with no seats. We were sitting on sacks of rice and beans when, suddenly, the plane rolled and dipped. Finally, the copilot came back to get us, and he strapped us in with him and the pilot up in the cockpit.
When we landed in a little airport, we got to look at the belly of the plane—it had been riddled with bullets!
The pilots got us transferred to a pick-up truck to take us the rest of the trip over the mountain. The treacherous, one-lane road was lined with cliffs and chasms on both sides of the road.
Whenever we came to a curve on the hillside, the driver would honk the horn loudly to find out if anyone was coming from the other side. 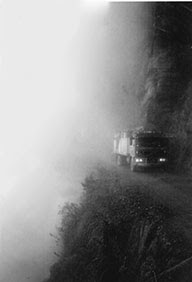 As our driver drove around one bend in the road, I looked out the side window. I was surprised to see a deeply-cut chasm, cascading about 1,000 feet below the road we were on.
After a long, harrowing drive, we finally arrived at our school for missionary children.
One week later, a taxicab driver drove up to our school. He asked, “Did an American boy and a girl with long, black hair arrive here last week? I’d like to talk to them.”
He explained why he was looking for us. “Some people hired me to drive them out of the area where the civil war had broken out. As I drove up the mountain, I was following a pickup truck with two American children in it.
“The truck driver slowed down when he came to one very dangerous bend in the road. He honked, then continued around the corner. But as I watched, I only saw the left tires on the driver’s side of the truck touch the washed-out road.
“The tires on the passenger side floated in mid-air. It looked like someone had placed a big sheet of glass under the tires.”
“I stopped my car and walked over to see if I could drive across that part of the road with my smaller car. But there was only two feet of road left there. The rest of the roadway had broken off, leaving a great chasm of about 1,000 feet down the cliff. I had to back up my taxi to a wider section of road, turn around, and drive back down the mountain. I guessed that the children were being delivered to this school, so I drove the long way around the mountain in order to reach your school.”
One of the school teachers brought my sister and me to meet the taxi driver. He shared his story and then said, “I came to find out what kind of special powers you children have.”
Glenda and I told him, “We don’t have any special powers. It was God our heavenly Father who saved our lives.”
Baffled, he wouldn’t believe us. He left, shaking his head.
All of this reminded my sister and me that God intervenes in our lives, even when we don’t know what is going on.

“Underneath are the everlasting arms.”
Deuteronomy 33:27